The Trip to Florida

Wow, I’m now thinking I should have made some time to post this earlier because I’m sure I’m going to end up forgetting things.  Or at least written down what we did each day so I could remember.  I’m going to try to piece things together from the pics and see how that works out.

Friday night we packed up the truck with the dogs and the B and made our way out of town.   We left around 6:30 and stopped for gas and dinner before leaving.  We left the night before they were talking about releasing the floodgates in Louisiana, so when Casey saw signs on the 10 warning us about closures, he woke me up (we were expecting the road to be closed and forced evacuations – how do you get from Texas to Florida without driving through Louisiana?!).   I tried pulling up information about what was going on my phone from the news websites but no one was making mention of what was going on.  It finally occurred to me (or maybe Casey suggested it) to check Google Maps and look at the traffic and it was one exit that was closed – traffic was merging into one lane and even at 1:30a, things were backed up and it took 30 minutes to get off one exit and take the on ramp back onto the 10 at the same exit.  From what we could see there was a semi that had caught on fire on the overpass. 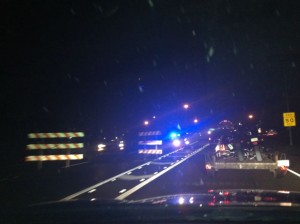 Once we were past the freeway closure, I started driving.   Casey went to sleep but Brady woke up in the stop and go traffic around 1:30 and didn’t go back to sleep until 5.  Then around 6, Casey woke up as the sun was coming up.  I was cruising along at 75 and this guy went speeding past us going at least 90, if not more.  He got back in the right lane after passing me and went into the shoulder going through a small puddle from an early rain shower and started going off the road, he overcorrected and went off the road and into the heavily treed median.  Since the trees were so dense, we had to locate the car by the smoke pouring out of it.  We thought the car was on fire so Casey got out to help as he was calling 911.  We didn’t know where we were exactly (apparently only a few miles from the Florida border) but we waited with the other car until EMS arrived.  The driver said he was ok and neither he nor his passenger were hurt but that his passenger was handicapped and trapped in the car.  When EMS did arrive we filled out a form while they got out their chainsaws to start taking down trees because they couldn’t get to or see the car either.  That was our good samaritan deed for the trip. 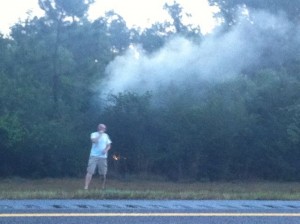 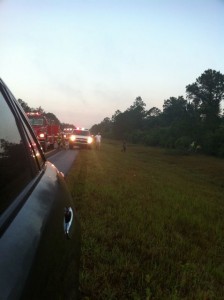 The rest of the trip to Panama City Beach was relatively uneventful and we were pretty happy and relieved when we finally stopped for breakfast at Dunkin’ Donuts at 8:30 (14 hours later). 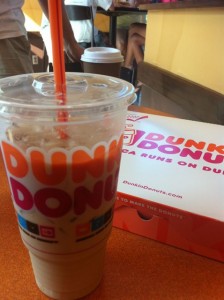 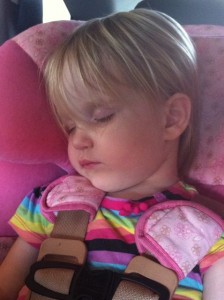