So picking up where I left off – we arrive in Panama City Beach at 8:30 am on Saturday.  After eating breakfast we headed to my Grandma’s house in Panama City to spend the day with her.  Grandma didn’t know we were coming so when we knocked on the door she asked if we were friend or foe.  She was pretty excited to see we had come to visit!  This was the first time she had seen Brady since her first birthday and second Christmas!  Not long after we arrived, Uncle John and his girlfriend, Karen, came over to hang out with us too!  We had a fun day just hanging out together, eating pizza, and playing with Brady.  With everyone’s help watching Brady – Casey and I were each able to catch a nap! 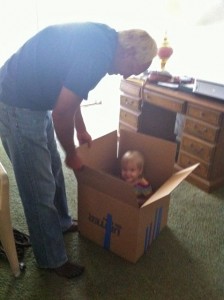 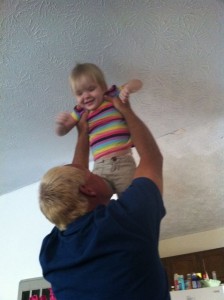 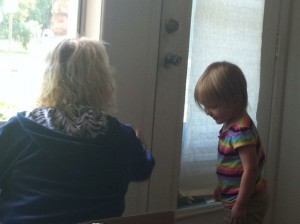 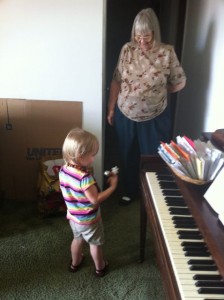 We arrived at our rental house around 5:30 and worked on unpacking and getting settled.  We went for a quick walk on the beach to show Brady (even though it was windy and cooler and stayed that way for several days) and then headed to Wal-Mart for food and supplies.  Casey let Brady choose what color noodle she wanted and she chose pink – I think we have the start of a favorite color!  Below is her look of glee right after giving her noodle a kiss! 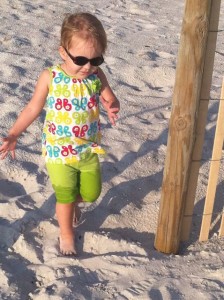 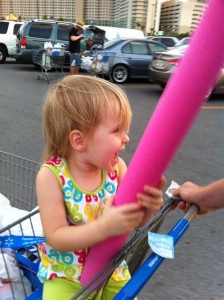 Once we got back, we fed Brady and were able to enjoy the sunset before heading back out to pick Sally up from the airport.  Because of a flight delay and the drive back to the house, we opted to just go next door to Schooner’s and bring dinner back to eat on the deck.  Since we were on vacation we allowed Brady to dictate her sleeping schedule and she did amazingly well sleeping in a queen bed by herself and sleeping through the night! 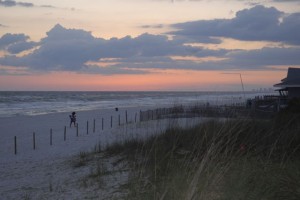