-We spent more time on the beach and have finally learned our lesson once and for all (I think) to not apply spray sunscreen when it’s windy out.  It always leads to a burn.  The only one that didn’t get burned is Brady (except on the crown of her head where her cowlick is – we just couldn’t avoid it there). 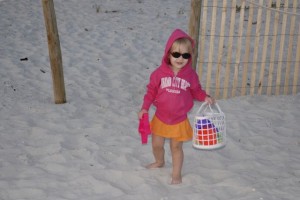 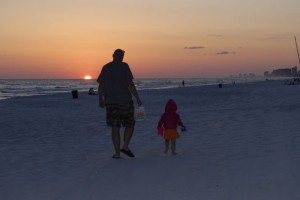 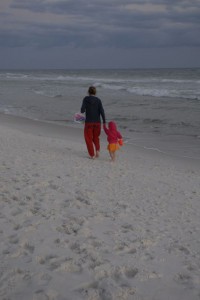 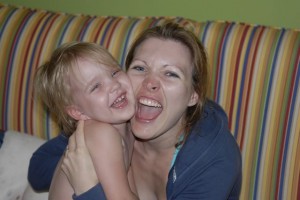 -That night all of us went to dinner with John and Karen!  We tried out Uncle Ernie’s on the bay and had some really great seafood.  The only downside is we asked to sit outside (Brady-friendly) and it was cool and breezy.

-My grandma drove out and spent the afternoon with us.  After lunch Casey took Brady upstairs and they both took a nap while Grandma, Sally, and I all sat on the deck watching the waves come in and the weather change. 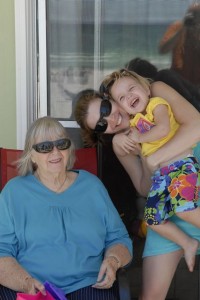 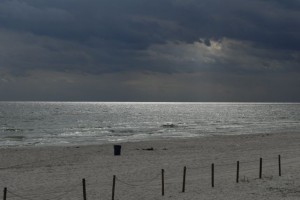 -After the nappers woke up and Grandma went home, we all took Brady for a walk on the beach.  This was her first time in the water and it was hard to get her to come out once she was in.  We ended up being late for dinner at John and Karen’s but eventually pulled Brady out of the water kicking and screaming.  We had a lot of fun at dinner chatting and catching up.  Unfortunately the battery on my camera was dead so it was up to everyone else to take pics (which I have yet to see). 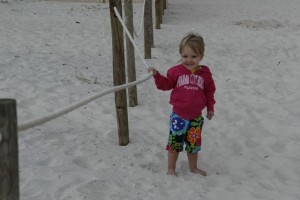 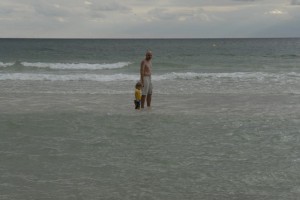 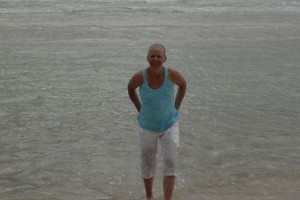 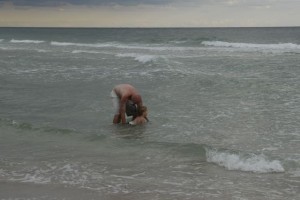 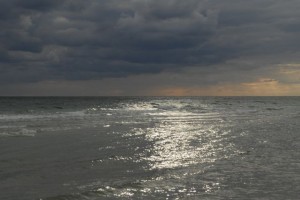 -Spent more time on the beach (noticing a trend here?) hanging out and enjoy the temps slowly getting warmer.

-We all went to dinner with John and Karen at Margaritaville.  Casey and I always make a point to visit the one in Vegas but it’s been at least four years since we last visited.  Either they changed their menu or their quality has gone downhill because the food was just ok.  The perfect margarita was still perfect though so I guess that’s a plus. 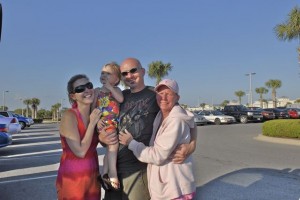 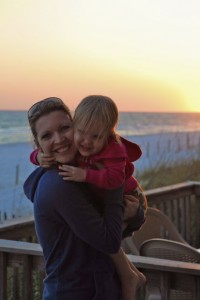 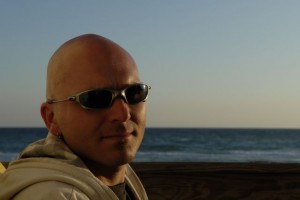 -Sally went home early that morning and we spent pretty much all day on the beach playing in the water and walking on the sand.

-We met John and Karen for dinner at Hooters and enjoyed the consistency of the food.  “No, I would not like ranch dressing on my Casear salad.”

-Apparently we had too much fun on Wednesday because there are no pictures except iPhone ones from that day.

-My cousin, Kerri, came out and had lunch with us.  Schooners was right next door and it was just too tempting to go there again so we could hang out without other distractions.  This is the first time Casey and Brady both met Kerri and the first time I’d seen her since 2005. 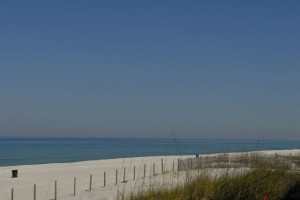 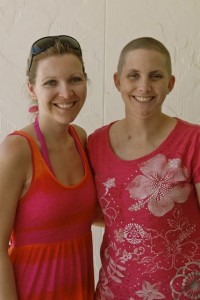 -That night for dinner we met John, Karen, and Grandma at Angelo’s for dinner.  Brady did pretty well considering and was a big fan of the crackers.  Grandma really wanted to buy something for Brady while she was out on the beach but I managed to talk her out of going to Carters even though they have my favorite clothes and instead going to Wal-Mart which isn’t my favorite store but was super close AND more importantly, has carts.  We looked all over the store and Brady ended up with two new sundresses (what happened to Wal-Mart carrying a line of Carters stuff?) and any other items she wanted – McQueen and Mater cars.  Ah, my little tomboy!   We said our goodbyes to Grandma and headed back to the townhouse. 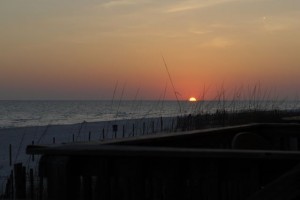 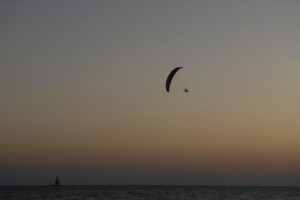 -John and Karen met us back at our rental and we all watched John fly into the sunset!

-We spent all day on the beach.  All day.  We didn’t even get in the car on Friday.  We just hung out and enjoyed the considerably warmer weather (one might even say hot) and ate Schooners for dinner before getting everything packed and ready for leaving in the morning.  Unfortunately we didn’t see anyone else for the rest of the trip – John ended up in the hospital and that’s not so Brady-friendly. 🙁 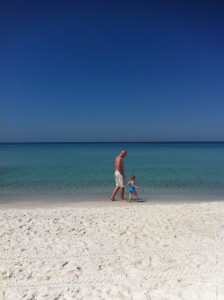 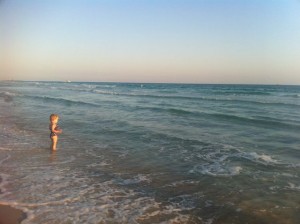 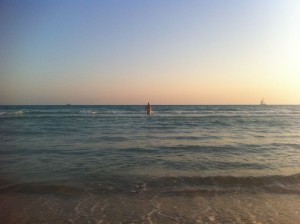 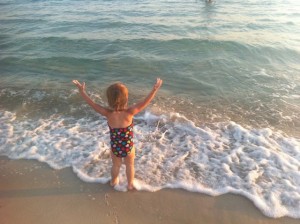 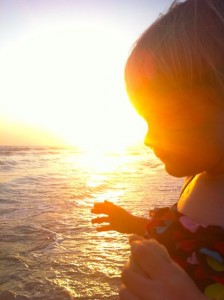 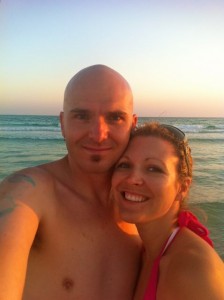 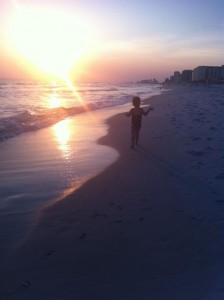 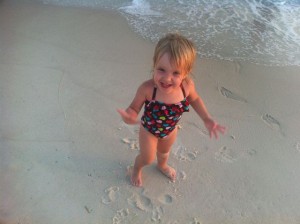 -We left Panama City Beach around 8 that morning and got home at 9 that evening.  Thirteen hours is not too bad and just goes to show we lost an hour on the way out there.  We had a great time and we’re hoping we can make it back to Florida again some time this year if everything works out!

One Response to Florida Trip Report – The Rest